I am so thrilled to announce that I’ll be covering South by Southwest for AND Magazine this year! I’ve attended and covered the event in the past, (remember Jake Gyllenhaal, Ellen Page, and Kid Cudi?), but as an Austinite who … END_OF_DOCUMENT_TOKEN_TO_BE_REPLACED

This one of the several pieces of mine I wrote about the Interactive portion of the South by Southwest festival that takes place in Austin. Source Code premiered in Austin and the entire cast attended the premiere of their film, … END_OF_DOCUMENT_TOKEN_TO_BE_REPLACED

One of the amazing experiences I had of SXSW was the premiere of the Can’t Stop Documentary of Conan O’Brian. The film documented behind the scenes of his tour, at a time that was in a flurry of media frenzy between O’Brien and Jay Leno. The film captured the parts of O’Brien we as an audience have always been curious of: his personal life, his sense of humor. The film revealed his boundless energy, his inability at that point in his life, to stop. To take a break from working, writing jokes, living in the world of comedy that he had helped create. The film was fascinating and offered amazing insight to the world inside his head, transferring all of his internal energy onto the screen to share with the world. 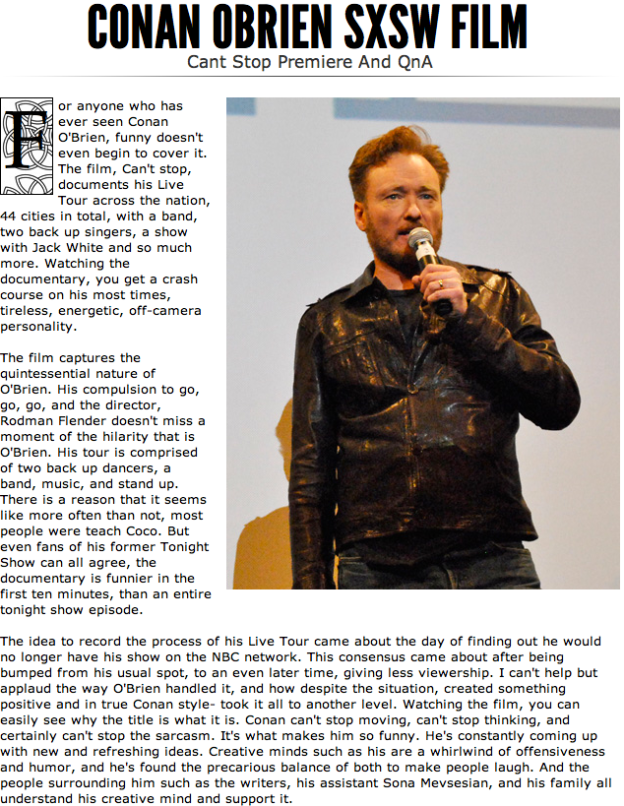 Super is a hilarious film with two actors familiar with the art of comedy; they have the ability to show the world a sense of humor as they perceive it to be. After the premiere of the film in the Paramount Theater, Austin’s most historic theater located downtown, the cast took a half hour for a Q&A session that was funny while being honest, sparked curiosity for the making of the film and elicited tons of laughter. 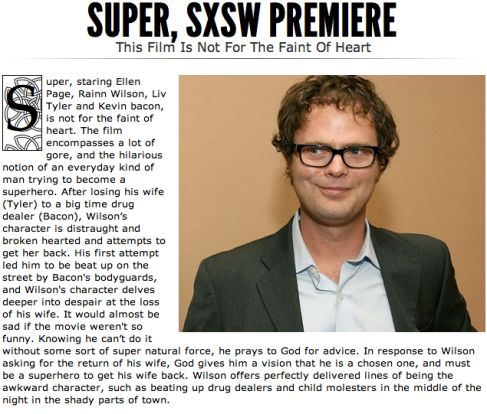 South by South West is a 10 day long series of conferences, film premieres and music festivals, hosted by the city of Austin. I covered music, film, and the interactive portions of the festival for AND Magazine, focusing on new and upcoming media. The range of diversity for films and music offers an abundance of creative inspiration, and I was fortunate to have the opportunity to cover it. One of the film premieres I covered was the world premiere of Source Code, starring Jake Gyllenhaal and Michelle Monaghan.